LeanChess is a chess program for the IBM PC AT and compatibles. As of this writing, it’s the world’s smallest chess-playing program; its smallest edition is 288 bytes long, 64 bytes shorter than the previous record holder, or 48 bytes fewer than half the length of the famous 1K ZX Chess.

How little is 288 bytes? Following Alex Garcia’s (lost) lead, we’ve been tweaking the text in the previous paragraph so that it occupies the same exact amount of RAM (sans links and formatting).

As the program shrinks it’s becoming a challenge to adjust the paragraph. :-)

The Book of Lean

In the beginning David Horne created 1K ZX Chess. And 1K Chess ran on ZX81, and it was 672 bytes long; and all saw that it was good.

And the land had rest 20H years. And Olivier Poudade begat a program, and he called its name BootChess. And BootChess ran on x86, and it was 468 bytes long; and all saw that it was boot.

And Óscar Toledo Gutiérrez begat a program, and it was a true Boot Chess. And he called its name Atomchess, saying, The atom is the smallest of particles. And it ran on x86, and all saw that it was good. And it came to pass, that men came and made Atomchess smaller; and it was 383 bytes long.

And Alex Garcia begat a program, and it ran on ZX Spectrum. And he called its name ChesSkelet, saying, After all fat is trimmed, only the skeleton remains. And men came and made ChesSkelet smaller; and it was 352 bytes long.

And Dmitry Shechtman begat a program, and it ran on IBM PC AT under DOS. And he called its name LeanChess, saying, The domain is available. And it was good, and no men came to make it smaller; and it was 328 bytes long.

There were giants in the earth in those days, and also before that. Jan Kuipers had begotten Tiny Chess 86. H. G. Muller had begotten Usurpator, MicroMax and others. Óscar Toledo G. had begotten Nanochess, JavaScript 1K Chess, Atari Atomchess, and others.

The following editions are currently available:

All of the above share the same AI, yet have different UI.

An implementation of Chess960 (a.k.a. Fischer Random Chess) in 369 bytes. It is able to randomly produce any of the 960 starting positions (with nearly uniform probability), yet it is smaller than Atomchess (which only implements the ordinary starting position). 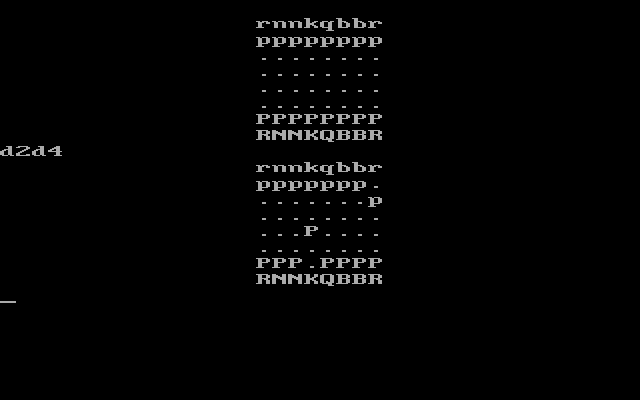 An implementation of Capablanca Random Chess in 476 bytes. 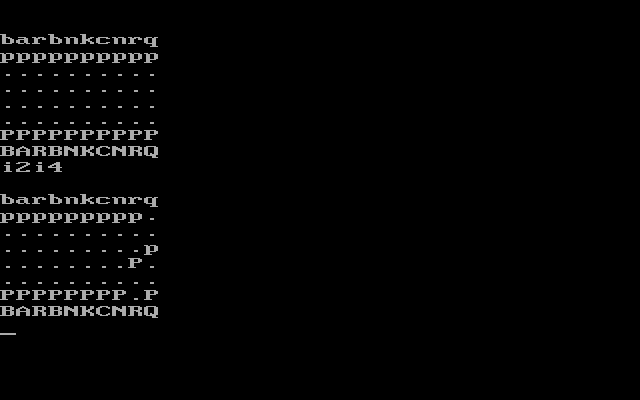 An implementation of Grand Chess in 383 bytes, same size as Atomchess (which only implements FIDE pieces on 8x8 board). 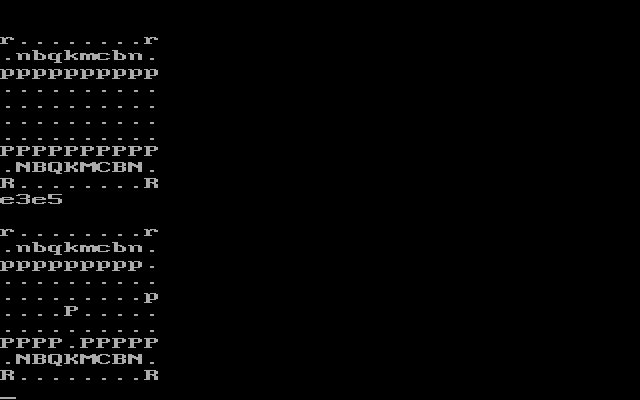 Many years ago, when we had hair where it belongs and didn’t where it doesn’t, we taught ourselves the assembly language of the 8086 processor (shared by its cripple brother, the 8088, which the original IBM PC was built around). After using it for writing a couple of (entirely harmless) viruses we moved on to other endeavours.

In late 2019, when we pondered developing an assembly-language chess game, the choice of platform seemed obvious to us. 8086/8088 assembly was still the only one we had had experience with, and as one’s hair grows farther away from where it belongs, mastering unfamiliar architectures becomes less attainable. At that juncture we presumed the resultant program wouldn’t ever come close to AtomChess, much less so to ChesSkelet.

To benefit the less technically savvy reader, an oversimplified interjection is in order. 8086, being a 16-bit processor, offers a reacher instruction set than does its typical 8-bit counterpart, thus more bytes are needed for encoding an average instruction. As a consequence, a (typical) 8-bit machine language program of equivalent function will consume substantially less storage space, unless it specifically requires 16-bit (or larger) words for arithmetics and/or memory accesses. Chess, conversely, lends itself ideally to the 8-bit realm. This explains the little hope we had of beating the author of ChesSkelet at his game (sizecoding, not chess).

On to the reason for switching from the PC to the PC AT. As we were browsing through the x86 documentation, we stumbled upon an unfamiliar instruction: pusha. The description read:

Note: this instruction works only on 80186 CPU and later!

As it turned out, pusha replaces eight consecutive pushes, whereas its counterpart popa replaces seven pops (along with two dec sps in lieu of pop sp), meaning that being used in conjunction, these two could effectively reduce code size by up to 12 bytes. Applying this twice to LeanChess made it at least 18 bytes smaller (the exact number is lost to the ages). It was either between or immediately after these two instances that it became leaner than Atomchess.

As we were initially ignorant of a method of enabling 80186 assembler support, we blatantly substituted every pusha and popa with db 60h and db 61h, respectively. Much to our surprise, adding the .186 directive yielded a further 1-byte reduction.

No computer series (to speak of) were based on 80186, making IBM PC AT the earliest platform to support this extension and, coincidentally, the minimum requirement for LeanChess.

How Good Is It?

Since all its (known) bugs had been fixed, LeanChess won every game it played against its creator, a fact that probably testifies to the weakness of the latter rather than to the strength of the former.

How Lean is It?

Since our objective is to make the program as small as possible, substantial compromises are inevitable. LeanChess does not implement

which brings us to the question:

Why Os for Bishops?

Reasons for denoting a bishop with an O are many:

Why Black on Brown?

Again, there are numerous reasons for applying this particular design to OSless editions:

Is It Really Chess?

A Chess program is a program that can finish more than 50% of the games it plays against an opponent that plays moves randomly chosen from the set of Chess moves that are legal from the current position according to the FIDE rules.

Since LeanChess seems to fail this test, it cannot be considered a full chess implementation. Yet, it is

while remaining the smallest. We dub it sufficiently chess.

Full chess (up to a point) and improved UX are planned future LeanChess extensions, albeit to neither Barebone nor Classic editions.

Is It Really the Smallest?

Some argue that a program that produces resign as its output and terminates is the world’s smallest chess program. H. G. Muller to the rescue once again:

Chess is the act of moving pieces on a (real or virtual) Chess board, and (…) actions like resigning or negociating a draw are merely part of a general mechanism of organizing matches or tournaments, which are not part of Chess.

A question of greater interest to us is the possibility of an actual chess program breaking the record currently held by LeanChess.

Firstly, the size of LeanChess itself could be further reduced (albeit marginally) by abusing the pusha/popa optimisation. We opted to keep the program lean in terms of stack allocations as well by only employing it on two instances, where we deemed it absolutely necessary.

Secondly, we believe porting LeanChess to an 8-bit architecture would yield a noticeably smaller binary. We leave that as an exercise for the reader (kindly requesting that, should they partake in it, the original copyright notice be included).

Finally, LeanChess 1.0 was created from scratch by a lone programmer with no assistance and without consulting existing assembly implementations (we had had a look at MicroMax a long time ago, and we are truly grateful to the editors of the Chess Programming Wiki). We are eager to see how others improve on our accomplishment.